Whether you’re a new or established business owner, by now you know the importance of having a social media presence. But if you’re just getting started with the various social media platforms, sometimes it’s tough to know where to begin.

Today’s post is all about helping you do just that. Building something from nothing is totally doable if you have the right tools to get going one step at a time.

Although it’s important to have some kind of presence on the major platform, you’ll probably only pick one or two where you’ll really focus your efforts. Start by finding out where your audience spends the most time; that’s where you’ll want to be. If your audience is millennials, for instance, you’ll likely be on Instagram and Snapchat.

Once you’ve nailed down your platforms and set up your pages, you’ll need a system for creating and scheduling your posts. The Rallio platform is a great option, especially if you’re trying to manage multiple locations. There are others out there, too, such as Hootsuite and Buffer. I won’t get into comparing these different options in this post, other than to say we’re happy to walk you through a Rallio demo. Click here to request one.

[bctt tweet=”Find out where your audience spends the most time; that’s where you’ll want to be. #socialmediatips” username=”rallioHQ”]

Most business owners would say that the reason they’re not posting on social media is lack of time, lack of ideas or a combination of the two. As far as time goes, try carving out 30 minutes daily to dedicate solely to social media. You might find you actually enjoy interacting with customers and building a following!

And as far as ideas, I’ve got several to get you going.

Don’t have time to write a blog post or an article? Someone else has already done it for you. Search for content created by non-competing entities, and simply share their content on your social pages.

Take our client Saddleback Memorial Hospital, for example, for which we actually create social media content. In this post, we shared mountain climbing safety tips from the publication Healthline, adding in a health-related spin (“bring the right gear, stay hydrated …). The post works great because not only did Saddleback Memorial not have to create the content themselves, but they also capitalized on a “holiday” of sorts, National Mountain Climbing Day.

Also easy, once you’ve done the work: Repurpose your own content

This one takes a little more legwork initially, but once you’ve done the work, you have endless opportunities to repurpose your own content. You can either write blog posts or videos yourself or hire someone to do it for you, but in any case, those posts are great shareable content.

Here’s an example. I wrote a post over a year ago, 31 Days of Social Media Ideas, in two parts. We’ve repurposed several elements of those two posts over and over again, pulling out different ideas to share. Here’s a recent tweet that capitalized on one idea from my post:

People love voicing their opinion on social media, so why not capitalize on their desire to be heard? Polls can be silly or serious, but make sure you ask something that’s sure to get a response. On Twitter, you can create polls right from your “Compose new Tweet” box. On Facebook, see this link for help creating a poll on the platform.

Some polls should focus on helping you learn more about your audience, while others might simply speak to a current trend. Entrepreneur magazine recently created a poll on the topic of the eclipse:

Are you making plans to witness the eclipse?

The post has nothing to do with entrepreneurship or small business, but it’s so easy to answer that users can’t resist voting in the poll. The lesson: Keep it simple and relevant.

Ask a Question or Invite “Fill in the Blank” Responses

Along the lines of polls, anytime you pose a question or ask users to fill in the blank in a post, you’re inviting engagement. Try a simple either-or question such as, “Would you rather eat hamburgers or pizza if those were the last two foods on Earth?” You can also post an engaging photo and either ask users to caption it, or create a fill-in-the-blank response, such as, “My favorite thing about summer is ____.”

Apps like canva.com make it easy to create your own attractive graphics. Find some inspirational quotes, plop them into a Canva template, download and upload the image, and voila! You’ve got a post. Repurpose the quote image across platforms, including Facebook, Twitter and Instagram. Here’s one from our CEO, Chuck Goetschel, created in Canva:

Or Create an Infographic

Share facts and stats about your industry in an infographic, which you can create yourself using Canva or Visual.ly. Head over to Daily Infographic for ideas, such as this gem, The Ultimate Guide to Burritos.

Go Behind the Scenes

Can you share a behind-the-scenes glimpse into the world behind your business? Maybe offer a look at how your products are produced, or make it personal, like this Instagram post of our team out to lunch: 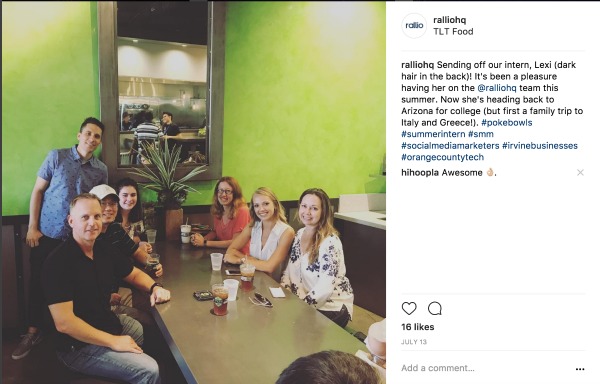 Ask your audience to post photos of themselves using or benefitting from your product or service. Not only does this invite some creativity into your posts, but it also provides the social validation people are looking for online. Your audience is more likely to believe a testimonial from a real customer versus a piece of sales copy you created!

As you’re browsing online, save your favorite articles and images so you can look at them later and get inspired to post. Pinterest and Pocket are great tools for organizing and keeping track of your content.

What are some other ways you’ve created content from scratch? Let’s hear your ideas! For additional brainstorming, refer back to my posts featuring 31 days of social media ideas, part 1 and part 2.